Error when reopening a VCMX file, objects replaced and moved

Hi! I am using VC4 with the Delfoi addon, and i am experiencing issues related to geometry suddenly swapping places after saving, closing and reopening.
The issue has happened to me once before, but is a total random occurence. I have saved and loaded countless times, without any issues. But on a rare occation, this happens.

Any ideas how/why this happens? It is severely irritating when everything is almost finalised, and then boom, this happens…

This is a known issue. Here are two threads discussing it:

Hey wondreing if anyone had a silmar issue. when i load my layout geomatry has jumped all over the place and in some cases even changed scaling here is a screen a couple screen shots. I didn’t do anything just close VC and when I tried to re open the layout it came out like this. I tried opening some of the back ups but they are all screwed up in the same way. but different geometry is screwed. as you can see on the screen shots the geometry is now a jumbled mess. this is super enfuriating as…

Hello. The problem is that VC replaces some components with some other component by itself. This can not be noticed when doing the layout but when I open the layout again, some parts may be replaced. Is this known behaviour? At least it is very annoying as it can replace components from huge assembly and replacing them is very time intensive. Basically when this replacing happens, I have to get a backup file that is not broken. In the attached picture this has happened, some components that wer…

Two good threads here, but i would love to hear a developer response from this.
This happened to me once again, but this time i was not even able to open the backup files.
This means that the programme is now basically useless, or i have to do this all over again…

This happened to me once again

No sorry, i dont know how to reproduce it, but i can explain which files changes.
In my case, it is only 5 objects that have changed. One of them is part on an exploded geometry, and the others are separate, individual components. They do not have the same names or anything. The strange thing is, that the components that are replaced, are only replaced by the same geometry (in my case, a welding gun). A rail, box, tool flange, and two pipes turned into welding guns.

Last time this happened it was with a bunch of items, but this time it was only these items. 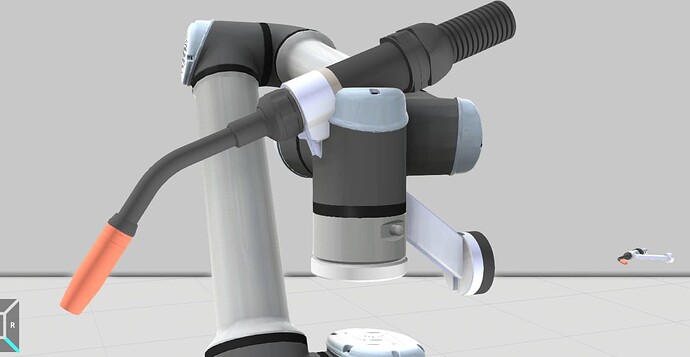 Note. In the image above, the robot is supposed to hold a small black cylinder, which is then attached to the welding gun. In this case, an assembly part has changed. It was imported as ONE part, and somehow it split the part and added a random welding gun to it…

Still experiencing this with Delfoi 4.3, multiple imported geometry files swapped features between themselves after closing and reopening program.
Multiple old saved versions are corrucpted too but it’s hard to tell when the error happened.

Any steps to avoid this? Does saving geometry as proper components help?