I would like to make a component create generate couple of blocks but the problem is that when I browse the file with the blocks, the program says it is not a component but a layout.

Could you give me a hint how to model the blocks as a component so that a component creator could generate these blocks?

I will explain in more details what is my goal.

The component creator is supposed to generate the two orange plates along with the grey blocks on top of them. The blocks and the plates will run on a conveyor after they are generated. 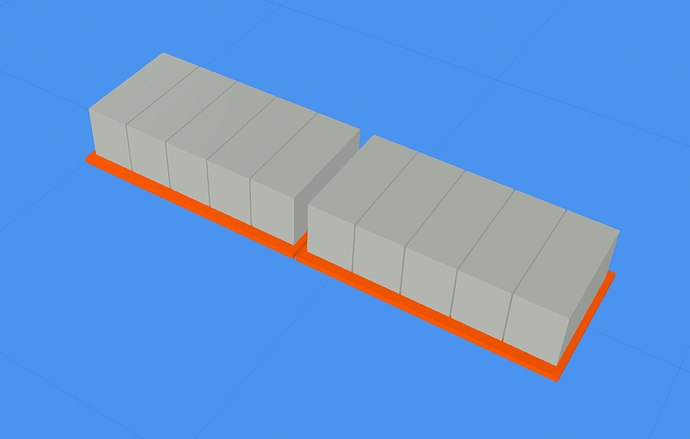 to generate the two orange plates along with the grey blocks on top of them. The blocks and the plates will run on a conveyor after they are generated.

Can you try using works process for creating them? it would work.

If I remember, you are rocking the KUKA.Sim… there are some components like pattern feeder in their eCat that can help you if you don’t want to model your own. One tip about the Component Creator is that it creates a component and ALL of its child components, i.e. the components you attach to the nodes of the component being created – see attached layout (creator makes the orange sled and boxes are attached to it.

If you are using VC product then there are lot of components in eCat that can do this for you. If you want to use scripting, you can use component container and creator to first make the orange bottom, and then create each box and attach it and transform it where you needed it. But there are components and other ways to do this without writing code.

Yeah, I am currently rocking the KUKA Sim Pro.

I managed to create the component with the Compnent Creator and also attached a conveyor to it. The difficulty was to adjust the coordinate systems(frames) so that the component is generated in the right direction. The frames of the conveyor were a bit messy as well, I just rotated and moved them according to my needs in the Modelling Tab and I hope this will not change them in the conveyor file, it should only apply changes to the file I am currently working in, I guess.

You can see what I achieve in the picture. 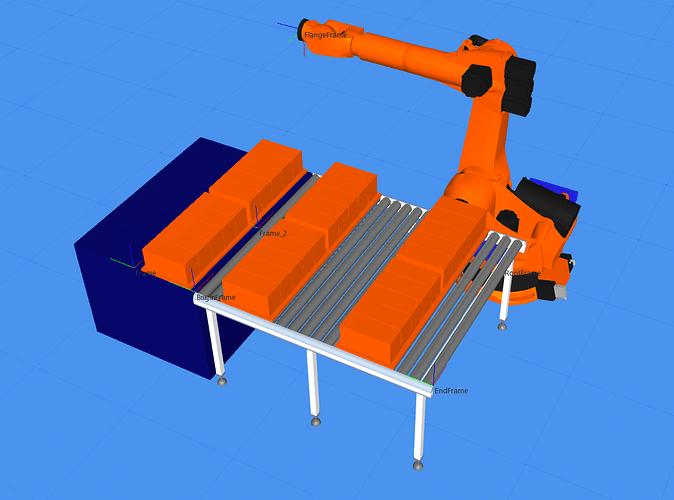 The only problem is that when the robot grabs the blocks, it will also grab the bottom plate.

Could you give me some more hints about how to eventually make the robot take only the blocks but not the bottom plate?

You say that I should create the bottom plate first and then create each block. I think I should avoid writing code for now since I am not completely confident with the program yet. A hint how to approach the problem without writing code will be appreciated.

What do you mean by Work Process?

If the robot is grasping the bottom plate that means the detection volume size is too big for the signal action or the plate is attached to one of the blocks.

Select the robot, and then in Component Properties panel, near the bottom find a section “Actions Configuration” and the go to the output signal you are using to trigger grasp. Modify the detection volume size in Z-axis to maybe be 5mm and see if the plate is still picked up by robot after you run simulation.

Without writing code… there are many different ways. simplest is just added all the components to 3D world, attach them to bottom plate, save the plate as new component, and then create that new component. there are deprecated behaviors like pattern behavior, etc. but i do not recommend using them.

Works Process is referring to Works library of components that are only available in Visual Components eCatalog not in KUKA.Sim.

Thank you for your response.

In other words all the blocks are referenced to the coordinate system of the bottom plate which makes them one component.

Do you mean attach the blocks utilizing links or something else?

I found out that Works Process is only available in Visual Components, I watched a tutorial and checked that there is no Works Process in KUKA Sim Pro.

Let’s take a box and pallet from eCat.

Yikes… That’s like buying a burger from the grilli in market square and you yourself have to go inside the kioski and make the burger.

In KUKA.Sim, the eCat should have a pattern feeder which makes thing easy for you.

Same components but with pattern feeder.

Step 1. Attach the box to pallet.

Step 2. Move the box where you want it on pallet, e.g. start index of your pattern. 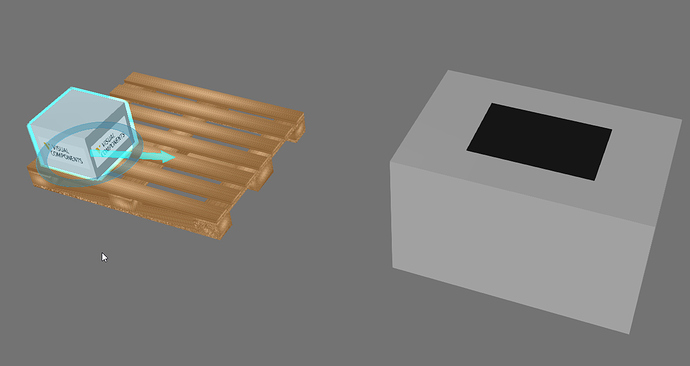 Step 3. Attach the box to the black part of feeder.

Step 4. Edit the Pattern properties of the feeder to use 1 hierarchy, e.g. the box.
Step 5. Run simulation and verify your pattern.

Good luck, friend. This is where I get off the bus, unfortunately, on this thread.

Thank you again for your help and response.

I managed to make it work before reading your post, I will try what you have suggested above, of course.

But something very weird is happening to the conveyor. You can see it in the picture.

I wired a signal from the robot output to the conveyor belt motor, so that when the robot puts two plates with blocks on the conveyor, the conveyor is supposed to start. But look how the two plate get unaligned to each other. The offset is just as much as the width of one plate.

Do you have an idea what could cause the plates to get unaligned? 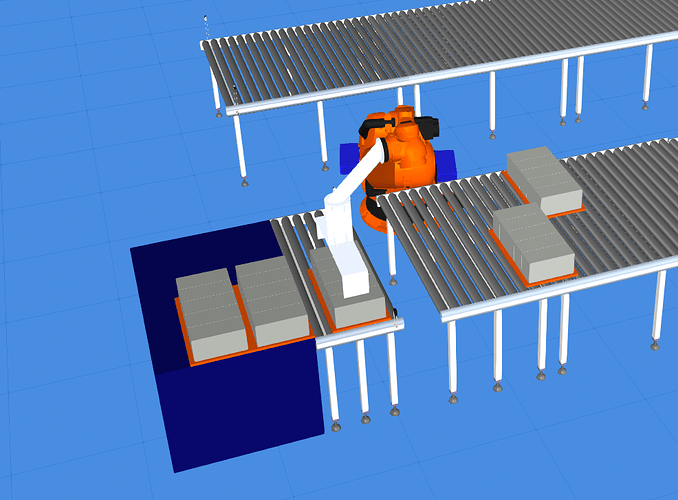 Thank you for your help again.

Your suggestion kind of worked, the blocks are transported together throughout the conveyor, but I am still struggling with making the blocks not overlap each other in the end of the conveyor.

Basically I have a sensor in the end of the conveyor line which is supposed to stop the part(the blocks). The sensor works properly, it stops the blocks but the next blocks just overlap the first ones, I mean they do not stop behind the first blocks, they just overlap each other.

I turned off the Space Utilization and have Accumulation and Retain Offset turned on, as it is by default.

I tried to figure out, how to fix this myself, but I am still struggling.

I am sorry for bothering you so much with my struggles with KUKA Sim Pro, but if you can suggest any kind of manual or any other documentation about KUKA SIM Pro where I read about all these commands and features, it will be helpful for me.

Look at the attached video to visualize better what the problem is.

No worries. The Help file, specifically the Behaviors reference can help.

What you described should happen because the parts are not respecting the space of their bound boxes.

You could undo everything you did to the path, and modify the robot’s signal actions. Check for a subtab in the robot’s component properties, i.e. select the robot as component, and then go to Component Properties panel. In the subtab, there should be a property to release parts as bundle, e.g. the two blocks are released and attached to one another, so they would move together. That is assuming the are both picked at same time. In VC eCat there are helper components like bundler and debundler for what you described.

To save time, I would recommend you contact support.

Thank you for your response again.

Unfortunately still no success, I cannot see anything like “bundle” in the Signal Actions subtab.

I tried to assign Length, Width and Height in the Property section, since I was thinking that the blocks actually does not have its dimensions assigned somehow as a feature or property but still the blocks overlap.

I checked the Help File, it has nice description of all the behaviours.

I guess I will have to contact the support for more detail help.

Anyway, thank you again for your cooperation.

I am sure I will figure it out in the end.

Alright. Good luck. The robots in both eCats might have slight differences, but this is the property I was talking about.

I am still struggling with KUKA SIM Pro, but, of course, I will never give up.

These days I was at the site, mounting and initiating some KUKA Robots and did not have enough time to look at KUKA SIM Pro, I will get back to it tomorrow.

I was thinking about your suggestion about the Bundle Release Components, I actually do not pick the two plates with blocks at the same time. I pick the plates, along with the belonging blocks, one by one(one(1) orange plate with five(5) grey blocks on it) and then place them on the conveyor. Therefore your suggestion about turning the Bundle Release Components on probably will not work either.

What I could say now is that if I use only one conveyor the plates with the blocks stop exactly one after the other. I was also thinking if the problem could be in the conveyor settings namely the detection volume feature similar to the the gripper settings. Somehow the conveyor does not detect the object size when there are two or, perhaps, more components placed along the wide side of the conveyor.

I am still discussing the problem here since, probably, someone else will have the same obstacle in the future and hopefully they can learn how to fix it from here.

Are you trying to do this? Without doing any scripting and using components from KS eCat, I program robot to place crates side-by-side, turn on conveyor, and then sensor attached to conveyor stops things.
Layout - Pick and Place Crates.vcmx (1.6 MB)

By the way the video is not active.

I figured out why I could not attach a sensor to a regular, straight conveyor. The reason was that the conveyor itself does not have the sensor interface in the behaviour section. I added Component Path Sensor behaviour, a Boolean Signal and a One To One Interface and now it works.

KUKA SIM Pro will not defeat me.

The way the conveyor is modeled in KUKA eCat is to not have One-to-Many interface for sensor connections, which is why I modified the conveyors in my layout. The video isn’t active because of some issue with Chrome and MP4 files on this forum. If you switch to edge you see it, but it is just a recording of the simulation of the attached layout.

Still no luck. Here is a picture of what is happening. 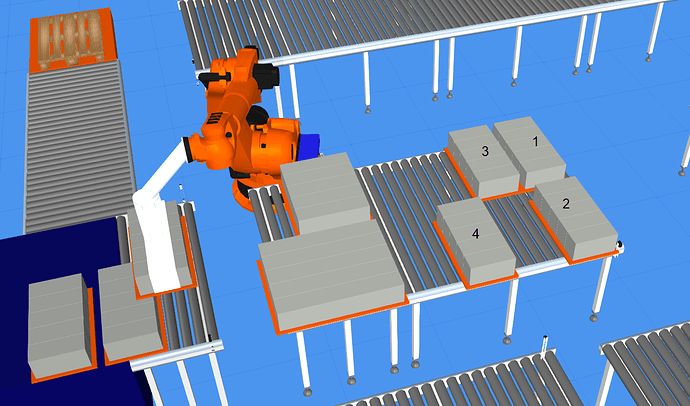 If I keep going with Space Utilization turned OFF, the crates 1 and 2 stop at the sensor but the next crates just overlap with crates 1 and 2.

I hope you get a better visualization of what I am trying to achieve.

Yes, one suggestion is to use physics path in the out conveyor. The SignalActions property of the robot component allow you to release components to physics. Otherwise, you might need to do some scripting. Support or maybe others here can provide quick solution. If you share your layout with support, they can probably write a quick script for you, e.g. when signal from robot received, attach the components on path together.

Sorry for the late response, I have just started going to university.

Well, I actually found the simplest solution - just using two conveyor where each blocks is on a separate conveyor.

But I will have in my mind what you said above.

I think I should learn some scripting, it will be useful.