Why cannot I import sqlite3?

As shown in the figure

Report it as a bug.

From the output and looking at directory in program files, this is what appears to happen:

Seems like there is an issue with that library. Probably the libraries were not recompiled correctly.

Please send an email to support so this issue is corrected in a future version.

Mine can work normally, please refer to the attachment

It has been tested many times and can run normally

This is most likely caused by the sys.path not being able to resolve paths containing Unicode characters.
If your VC installation location contains non-ASCII characters the python interpreter is unable to load the dependencies/imports. It’s a limitation in Python 2.7.

You can check the python system paths by e.g. writing to a component script and compile:
import sys
print sys.path

I have tested that if the DLL file is placed in the above path, there will still be problems after a period of time. Try again to test it in the following path. OK. For your reference.
path: D:\Program Files\Visual Components\Visual Components Premium 4.1
sqlite3.dll (753 KB) 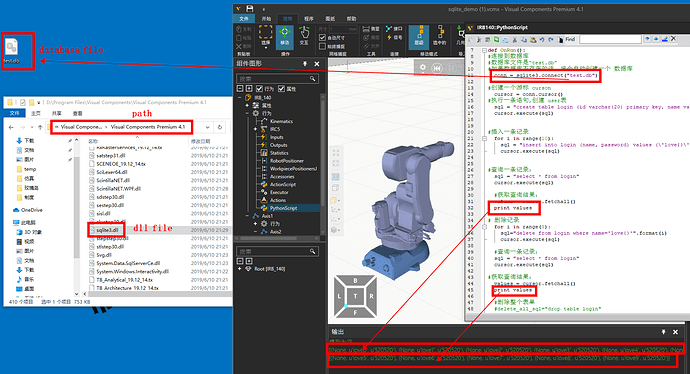