Use an Indexing Table: Grasping an object

this lesson doesn’t contain how to grasp the object after certain rotations of the table. Following this logic explained, the robot is grabbing the clyinder including the table (it seems like being stuck to the table). How do I change it to just grab the cylinder instead ?

Hopefully, the attached layout steers you in the right direction.

All I did was modify the layout file of the tutorial:

As you can see, all of this stuff was about robot programming not the table.

If you attach your layout I can look at it to see what is causing the table to be grabbed.

I need to place up to six different parts on those horns (each process step some parts will be added). This ain’t a problem, but merging all six parts to one after the last process step is. Considering this situation I want to pick the assembled new object as one part after the last step with a robot and place it on a conveyor. Trying to find different ways to solve it were not successful.

I would need to see your layout; hard to visualize what you are trying to do since the parts on each horn are so far a part. If you don't want to share the layout then send it through VC support.

But if I had to guess, you are adding parts to each horn every step of the way, so after the last step you want the robot to pick up the assembled part. That is doable. I will make another layout that shows one approach… there are several.

OK. Here you go. Quite a few things to explain. 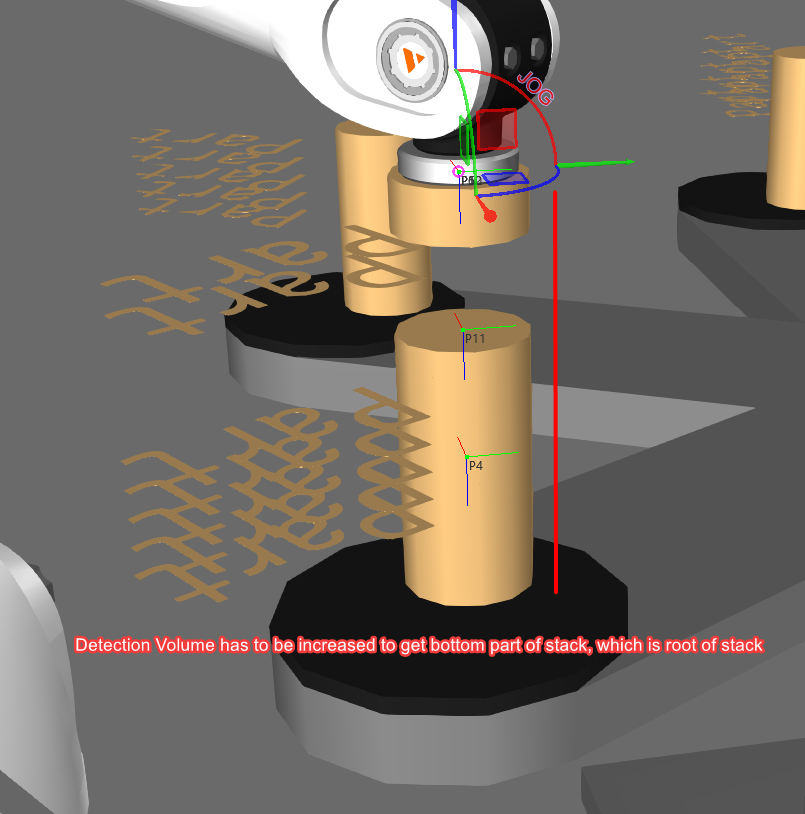 And that’s about it. You, of course, would optimize the solution, so the robots better coordinate work. For example, robotA places part, rotate table, pick stack if there is one; robotB places parts to form stack, signals that stack is ready, waits for next rotation to make new stack, and so on.

The concepts at work here are basic, fundamental, and advanced:

FUNDAMENTALS ADVANCED We can disagree about what is basic, fundamental, etc. It is just a list of what skills and knowledge were used to make the attached layout of this post in a relatively short period of time. The process itself of making the layout involved iterative tests using: Terms: Let me know if you have any more questions about the indexing table and the tutorial. Hope this all helps.

Thanks for the quick response. The solution explained is coming close to the issues I have. Still I coudn’t find a solution. Therefore, I attached my model I’m working on so that you get an better idea of what is needed. Mainly the model describes an welding process where after step 5, the baseplate and the 6 blades should continue as one component. The robot is just grasping the baseplate and leaves the blades on the horns.

It generally goes a bit complicated when mixing Works library components with non-compliant ones… like in this case.

I’d recommend to stick with Works in this case and replace the Indexing Table with the one found under Visual Components -> Works. Then adding “Works Robot Controller” to all robots.

Next I’d add a Works Process and teach the correct location of all the vanes (Schaufel) and the housing © to it like in the pic below (Remember to rename each vane to have a unique name, like adding a running number to the end):

Then add Tasks to this Process in the right order, starting from the first station to the last and finally clone and connect the Process to all the stations. In order to turn the table, add necessary task calls to the other processes as stated in the tips below.

For more details refer to the attached layout. You can also take a look for the "Indexing Table Layout" under "Demo layouts" in eCat.

Some of our Academy videos might prove to be useful here too, like: “Simulate a Palletizing Operation with Works Library” (https://www.youtube.com/watch?v=HPi20dxs1IA&t=843s)

P.S and if one really wants to stick with the original Indexing Table, Works Processes can be attached to the Horns and “WriteSignal” task can be called in order to rotate the table around. It requires some checking of the state of all stations or some timing in order to work as supposed.

Hope this helps and sorry for the late reply if you’re still fighting with this application!