I am writing because I would like to implement a position-based conveyor. The final aim is to have a conveyor component where:

I've tried to create a new component including a ComponentCreator and a OneWayPath and it looks like that having a connected output path is a condition for the succesful creation of a new object, am I correct?

Moreover, the speed of the OneWayPath must be different from zero, while in my case I would like to have zero speed and to manually update the position of the objects.

Finally, I am trying to connect the new part (e.g. a product) to the parent object (e.g. my position-based conveyor) using the attach method, is it correct? (I guess no since, in my case, that causes a crash of the software

). I would like to store the new objects inside my custom conveyor and then to go through the list (should they be listed under ChildComponents?) and translate them manually, based on the position of the conveyor.

Thank you in advance for the support!

The creator does not need to flow directly into the path. You can flow into a container, make the adjustments to part’s position, and then grab part onto path. In order to keep the position of part, set the path’s RetainOffset property to True. The script in the attached layout shows how this is done.

A path behavior can have a speed of zero. From there, you could create an array of its child components/contained components. Depending on how you do the sync, you could just feed the position value to element in array, call a function to update its position, and then render it.

A path behavior does have a step interpolation that uses segments, but it is a bit tricky to work with.

Hello, thanks for the quick answer and for the example.

What I am still missing is the Speed of the Path being set to a zero value. If I try to set it from the interface the value is not accepted by the GUI (see image below). Am I doing something wrong? Should I force it from the script instead? 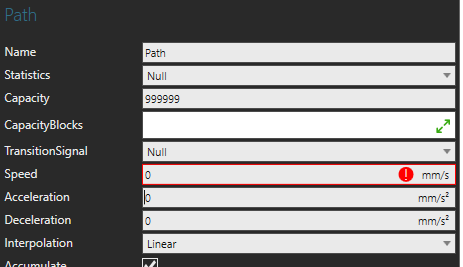 If I go with the ComponentContainer, am I then in charge to “pass” the objects to a component eventually connected to the OutInterface? Is it possible to manually handle that from the script?

I guess that going with the Path approach would simplify that… is there any way to force the position of a Path?