Part Disappearing when dropped or not attaching to conveyor

I have a quick question for visual components. I attached my simple layout it has a few robots moving a part. At the end there is a conveyor. My issue is the part is not attaching to the conveyor. I want the robot to drop the part onto the conveyor where the part will move on, either to a sink or to another process. 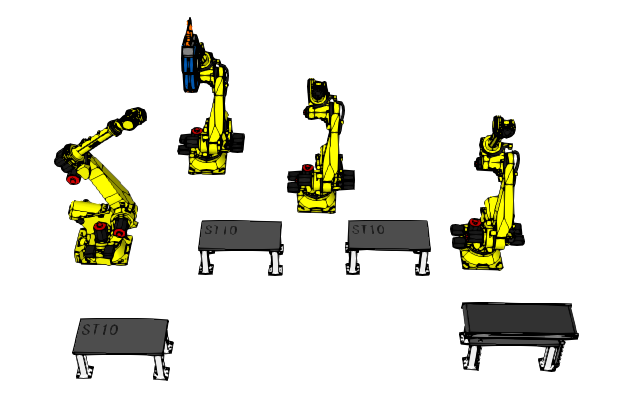 I still don’t understand how component containers interact with each other fully however my guess is that the issue is with the containers somehow.

I have tried disabling ReleaseToworld in the robot signal action menu but then the part just disappears when it is dropped.

I have tried drop to physics but then the part just falls through the conveyor.

I would like to find a solution through either just the settings or python scripting as I do not want to implement this through Process modeling or works.

Disable “Release to world” and also remove/move the hidden tyre on top of conveyor. If that tyre is there then release action identifies it as the new parent for dropped tyre and it disappears.

OMG this is hilarious I can’t believe it was that simple. I had already tried disabling the release to world but it made no sense to me why it was disappearing. I had forgotten about that tire and did not realize it would grab the instance of the tire and turn it invisible. I spent all day yesterday trying to make sense of how containers worked because this wasn’t making any sense to me . Thank you so much for the quick response.

No problem. I can say you’re not the first one to run into this problem. Hidden components can be treacherous.