I´m trying to import a scan of a room to then build the simulation in it. I´m scanning with Kinect. When I try doing it with 3d Scan (Window´s own app) it imports to Visual components, but it´s only a plain model without any colors. When I try with RTABMap I can only save it as .ply, so I opened that into MeshLab and converted it to .obj there, but for some reason, Visual Components doesn´t even import that. So my question is if anyone has tried this? If yes, how did you do it? I´ve seen the final result in promotional videos, so I guess it must be possible…

According to this post the imported map isn´t going to show up in the VR animation. Has there been any progress with that.

You can import *.pts files in this format:

The first number is the point count. Following lines are points in X Y Z R G B format. OBJ should come in with textures. obj requires separate mtl file and the texture files.

VR doesn’t still support linesets or pointsets. OBJ import shoud be triangles so that should work in VR. Please share some sample files and we can take a look.

Hmm. I seem to have misplaced the files (the summer holiday made me forget everything :D). I´ll try scanning again as soon as I can. I´ll also try with .pts. Thanks for the help so far.

Here are the 3D mapping samples. The quality is quite poor, but it´s not really important for testing. The .3mf is Microsoft´s native format (from “3D Scan”), which I then transformed to .obj in “3D Builder”. I now also managed to save .obj directly from RTABMap and that´s the third file.

I´m guessing I´m doing something wrong when I´m importing the files to Visual Components. I check that I also want to import the textures, but it doesn´t ask me for the location of the files. I also attached the screenshot of the tool that I´m using for importing.

Edit: I couldn´t upload the .3mf file due to forum rules, but I think it´s not that important.

I can import the obj file with the textures. Make sure you have the obj, mtl and the bitmap files all in the same folder and don’t edit the file names. (obj standard relies on the file names)

Also make sure you are using the latest version of the Visual Components. There has been a bug related to the obj textures in the earlier versions. 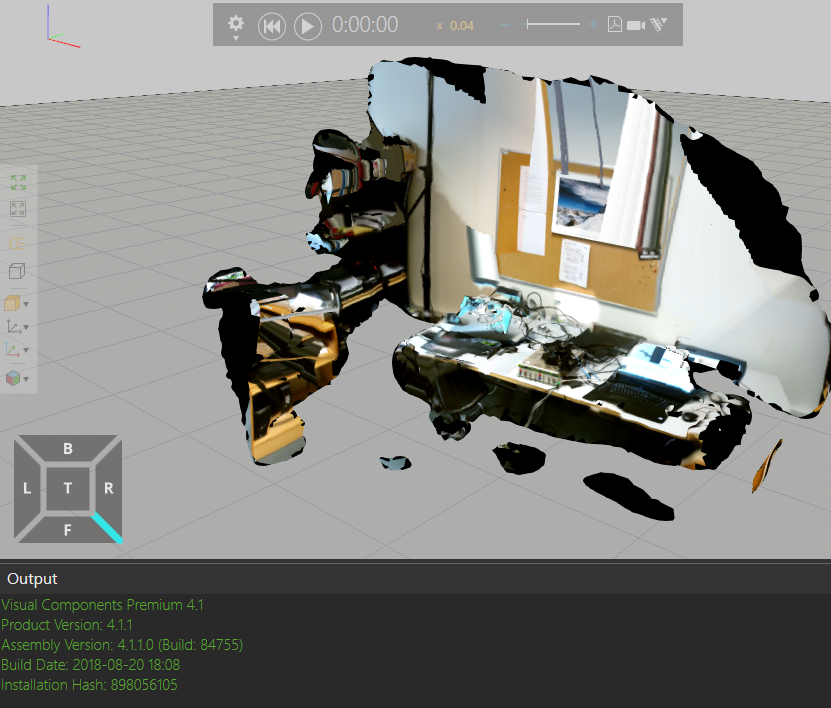 Maybe the software version is the problem. I´m using Visual Components Premium 4.0.5.0. I don´t think we have the license for 4.1 unfortunately.

I´m importing the files exactly as I uploaded them here. I didn´t change the names. But the texture is just called “texture.png”. Is that correct?

Did you import the file with the “Import - Geometry” tool? (see the screenshot in my previous post)

You can use the attached python version of the obj reader. It won’t create the textured material but it will read the texture coordinates correctly. After importing create a material manually on the modeling tab => Tools => Assign

Extract the zip file to My Commands folder and restart Visual Components and you should have two new button in the ribbon. (Import/Export obj)

Thank you. I´ll talk to our IT department about the update.

Find attached a video that shows how to import it with that python command (provided couple posts above) and then create and assign the material manually.

This in case you don’t get the latest version of Visual Components up and running.