How to Attach Objects to Conveyor Paths

Layouts made in video are attached.

Note that I am also attaching a layout where push tray has a ProdID property and conveyor sensor filters push action based on ProdID of tray.

One issue not covered in video is how to filter objects that are attached to path based on node level. For example, a part attached to a tray that is attached to conveyor would be included in list given by vcNode.ChildComponents.

Sorry this was not covered in video, but there will be a follow up video explaining how to make the push tray grab and release parts using containers and simulation logic as well as physics.

I tried to follow the exact steps on the video. I have an issue with the path on the curved conveyor. Top conveyor is what I downloaded from the link above. Bottom conveyor is my setup following steps in the video. 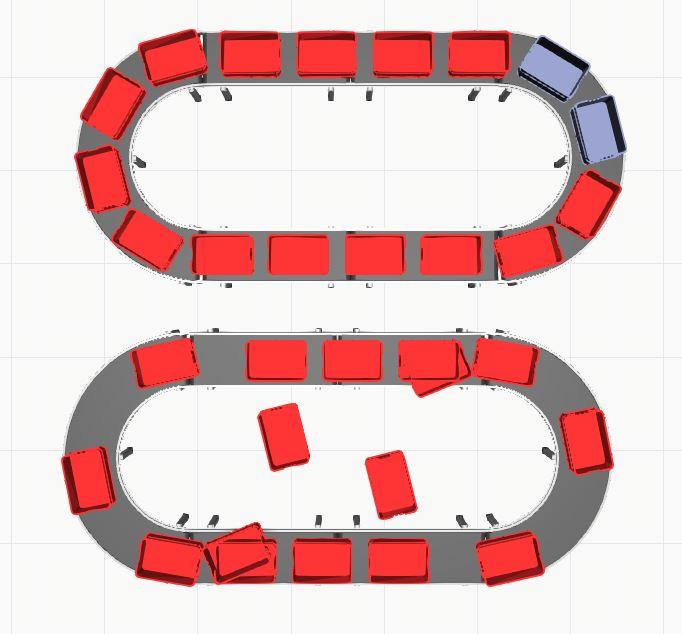 It is a known issue. In the video, notice the ConveyorType property is changed to update the component, thereby its path.

To everyone, whenever you encounter this issue, a workaround is to change a component property, for example ShowRollers or ConveyorType, and back again. A property change should be enough to update the conveyor’s path, thereby fix the issue.

I do know the issue is being address and worked on. For now, just remember you can change a component property that in turn updates the Path behavior of the conveyor, specifically its Path property that references Frame features. Any property that rebuilds or shows/hides geometry should do the trick.