We are trying to model a gripper that we found from grabcad based on a gripper that is already in the models in visual components in terms of linking and movement of different parts. (The image of the gripper as well as its disclosed version is attached to the post )

We tried copying some of the behaviours and linking relations from an already existing gripper but it did not work out the way we planned. The joints do not rotate sensibly we need any help we can get.

Thank you in advance.

Where are the pivot points? Also, do you understand the expressions for the joints in the component? Sometimes it is easier to focus on one jaw, make it work, and then make the other jaw a “follower” of its counter-part’s joint.

Someone should definitely be able to help you, my friend.

You can model those kinematics with the trigonometric helper functions in the expression language. Commonly referred as sasa-functions. It gets a bit tricky as you need to measure the current state of the mechanism after import and take those angles and link lengths into account. However it is quite straight forward, but it is not super easy or fast on the first try. That’s why we are working on an addon that would do the math automatically for you, but it is not quite ready yet and I noticed the current addon wouldn’t support the structure you are referring to. Need to add it in the addon.

Anyways, this is how you can solve that one.

I modeled dummy shapes to represent similar kinematics. Find the model attached. Here’s a picture showing the key elements in the mechanism. We want to drive the angle “a” which will be driven by the joint “J1”. Go to reference doc and find sasasa functions for quadrilaterals. Help > Reference Guide > Expressions > Functions 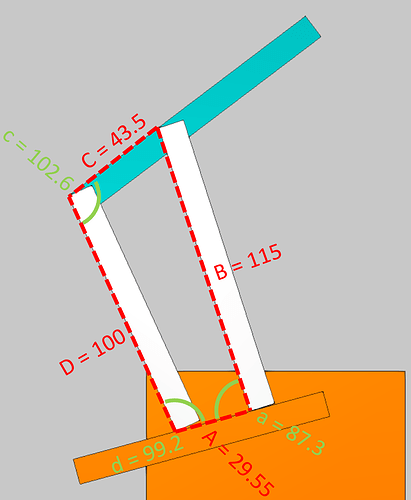 First off, thank you very much for your explanation. We tried to do everything that you explained and failed miserably.

If you ever have the time and resources could you possibly give it a try? It would mean so much to us as we have been working on it for days now. We attached the document in vcmx format.

Thank you again for your help.

link to a follow-up thread.

Sorry for the over engineering. The kinematics of your model was a lot simpler than what I described. When those links on the opposing sides of the rectangle are same lengths, it makes it a lot simpler. That also forces the pads to be parallel to each other at all joint values.

Sorry for the confusion. Maybe that solution for the complex quadrilateral comes handy some day later.