I have been trying to record video using fly camera but as I set different views and reset and start the simulation it starts with third view instead of view1. When I remove views after view2 it works fine(starts with view1). This makes me unable to record whole video after view2. As a reference I watched lesson of fly camera on the website several times but my problem did not solve. Please let me know how to fix it.

I would suggest stop using the fly camera component, and use the built-in Camera Animator feature. What you described sounds like View1,View2 and View3 have a simulation time conflict and/or the views themselves have the same view in the 3D world. About same views, you can quickly verify this by accessing the View Editor in the 3D world toolbar when your layout is loaded.

I used camera animator feature and it is working fine, taking all the views now. I want to know if it is possible to change the properties of each view like adding delay time between two views, time of each view, starting first view at particular time instead of from 0:00:00. Right now it is animating from start.

Delays can be done by having same view immediately follow itself followed how much time to stay in the view. If you do not want animated camera movements, turn off that option and then camera will jump directly to next view, e.g. at specific time in simulation. 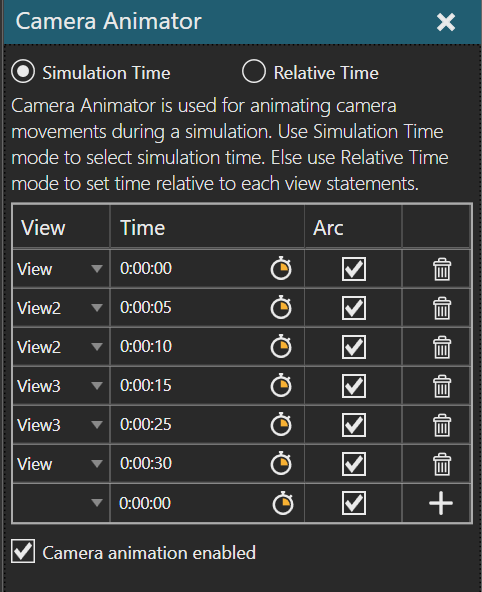