Im having difficulties figuring out the best way to pick & place various parts from more or less the same location, let me describe:
Looking at the image here:

It contains 3 different components which arrives on a conveyor (In reality im going to have 200 components in this position).

Now my question is; How do i make a universal pick-&-place which is capeable of transporting these 200 units into the depalletizing position and then creating a sequence to order two different robots to perform this depalletizing in the order that i choose?

Does someone have a good reference or tips how to do it?

Setting up the pattern of your products and controlling the order they are depalletized would be easy to do with the Process Modeling assembly products functionality.

Otherwise you would probably need to use a combination of “Set base” statement(s) and Python scripting. 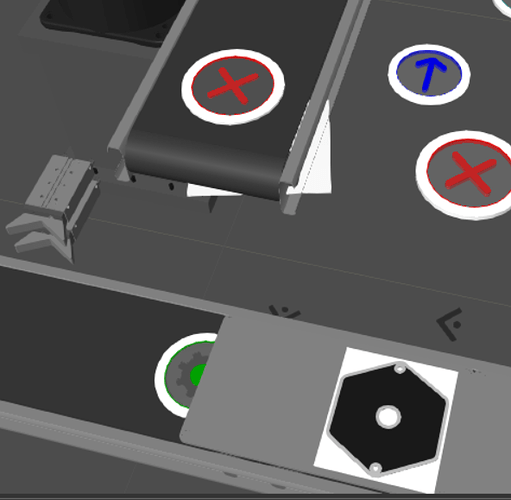 You can do that on the “Sink” process side by specifying the accepted product types in the TransportIn statement.

Its beggining to make more and more sence… But im not sure if im doing it the right way! (The easy way)
This is where im going so far: 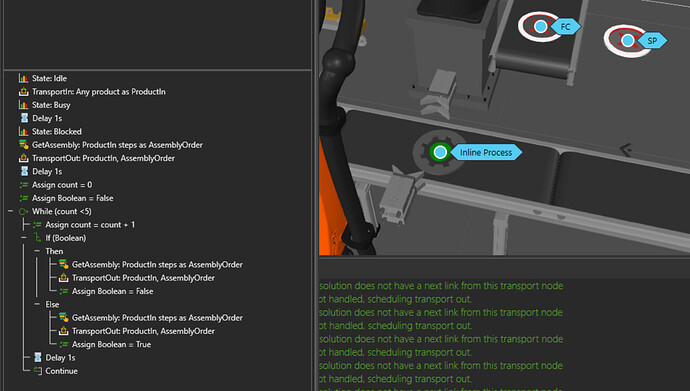 I understood you just want different product types to go to different implementations of the same “Sink” process. VC 4.4 eCat has an example layout of this called “Assembly - Order Index”.

See how the two “ToConveyor” processes have different values for “AcceptedProductTypes” in their TransportIn statement, and that is all what is needed to distribute the products by type.

Hey Tsy
The Assembly - Order Index have been a huge succes and help for me! That was what i needed to better understand how it works! Thank you!
However im having trouble with controlling the orders of the De-assembly, Yes they are picked in the order that they are defined in the Assembly (1-200 and then destacked in inverse direction)
But as the picture here shows, the robots dont always wait for eachother but just get told to go and pick inside of eachother!? Is there a way to control the robots a little as it seems that the taskcontroller in the bottom of the robot is just giving the new task as soon as the next assembly # is available? 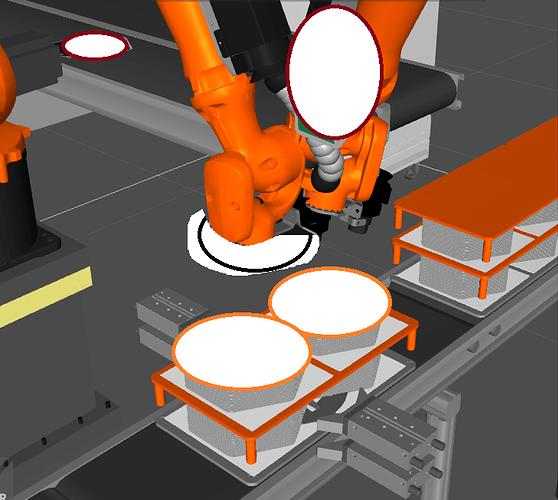 image730×653 131 KB
Its like the “TransportOut: Tower, FC” statement is just staying there untill the entire assembly is de-sambled:

Big thanks in advance

That is a different, more complex, problem. However, you can pretty easily force one robot to wait in the “placing” subroutine while other is picking using the robot program sync statements.

So, this concerns both process modeling and robot programming: Does anyone have any experience in syncing two robots’ programs while they’re performing an assembly task? To be precise, I’m using the regular GetAssembly>TransportIn in one of my cells, but the issue is that I can’t use the Program Sync Statement in the current defined assembly order. This is because the Get&Transport sequences are pretty much tied to each other (as far as I know). On the other hand, I don’t want to implement thi…