Simulating down time in robots

I am trying to achieve simulating when robots break down in my line. I am trying to use a python script
to wait for a certain amount of time (using a distribution property as the time variable)

after that time the robot should break. stop working. I got this functionality working with simple machines
but I can not get it to work with robots.

I have tried setting the vcHelpers.Robot2

but even after I set the IsEnabled property of the executor to false the robot keeps moving.

help me please I am running out of ideas

I tested stopping the robot and then re-enabling it with the following script:

Hi @Este First of all thank you for quick reply

I should have mentioned something else though

My robots are running routines from a RunRobotRoutine “proccess” statement
and I also have the robot connected to a Process robot controller.

will I be able to get this fucntionality even though I am using a Process robot controller? or is there any way to achieve this through process modeling UI or is the best option to just rebuild the whole line through python scripting and get rid of the process modeling components in order to get this script to work.

Have you tried implementing this without code directly in the Process?
Here’s an example using the IF statement: 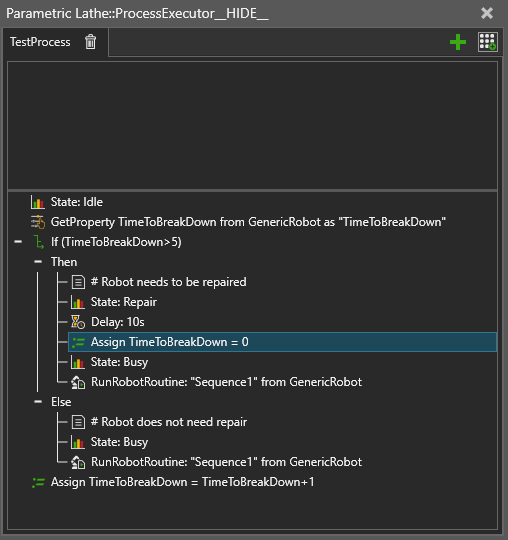