Is it possible to render the scene on a remote computer/server with a better GPU and Blender installed? If possible for pictures and the frames of a movie.

Make scene on my laptop -> Convert it to blender scene -> Send to a remote computer, which make the render.

In this way I can continue working on the scene while the scene is rendering. And the rendering will be faster because of the better hardware and cooling in the remote computer.

I think it is possible to program, but my knowledge of python is to limited to implement it myself.

Hi! It is possible. When you are rendering, tick the option “Open in blender” in Advanced category in Blenderer addon. Then when blender opens, set all rendering settings as you like, then in blender click File > External data > Automaticlly pack into .blend and then File > Save as. You now have .blend file with all your settings and model from VC which can be opened in another pc and rendered.

Hi all, how do you render videos? The default tab on the blender add on lets me select a component and lets me get an output picture of that component. How do I render the entire animation? I tried doing this on the animation tab but I don’t think its working for me.

do the mighty Blender AddIn already work with Blender v2.81?

Please check the documentation provided. It explains the animation rendering step by step.

Basically you need to set your start and end time. Chech the record option on. Run simulation until that check box is automatically cleared. And then click on the Render Animation. That’s it. Animation rendering uses the same file path as defined on the Default tab except the filetype will be video file type.

sometimes I have the some issues with the Blender Addon when the geomtry in the layout is heavy.

I would be incredibly assome to have a possibilty to handle also heavy layouts?

EDIT: After I was able to stop the Blender-cmd window at the right time 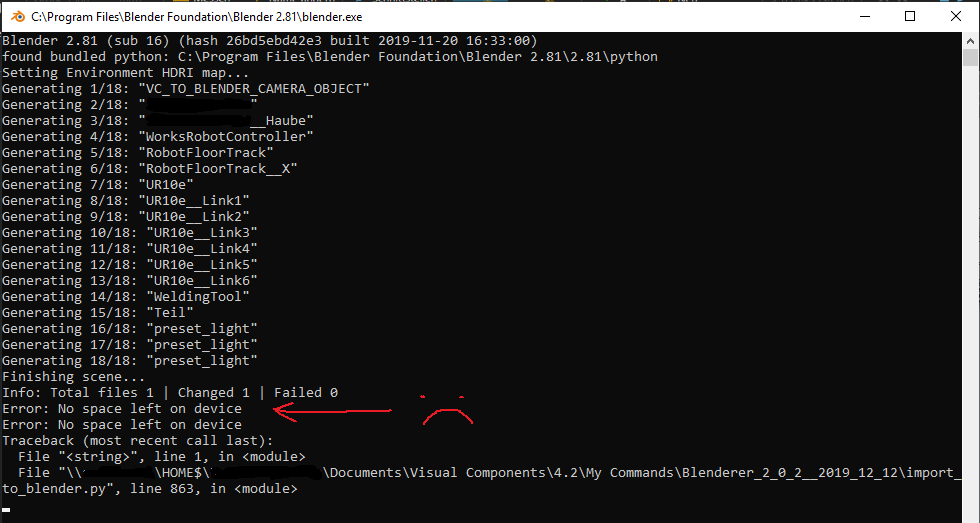 So i fixed the problem by modifing the tempuri in Blenderer.py to another path!

Hey there!
Since the 2.0.2 version VC gives me a Error message in the output, which I attached below. Any ideas to why this is happening?

EDIT: Forgot to mention that it’s happening after I click “Render”. The addon itself loads fine

when I export an Animation with the addon where I use a simple selfmade hdr-map I get the following message in the blender-console.

What means “cannot be made relativ”?

By the way has someone a source to download hdr-maps which consists out of one colour (white, grey,…). Or maybe can post some monocolour-hdr-maps here?

Is it possible to render blinking lights in animation? Suppose we use AreaLight component. When its Visible property is True, the light is on and vice versa when comp.Visible = False. In this case, pictures in both states are rendered correctly. However when dynamically turning component’s visibility on and off during simulation, the rendered animation only shows the state at the start of simulation - the light doesn’t blink.

I don’t know if this is possible to achieve directly from VC, but you can always open your scene in Blender and animate your light with keyframes.

A have a little problem with this addon.

When I start a VC I see the following and the “Blender 2.0” button doesn’t work.

Do you have an idea what’s wrong?

hi is it possible to replace materials from VC to real pbr materials in Blender. ex aluminium material in VC converts to a PBR aluminium in blender from blender kit etc? or can i make a material library in blender that can be acsessed by blendereer?

If components was hided during simulation. I can still see it after the render. And creat light didn’t work too.

Does anyone else have the same problem? How to fix it?

I move the component far away instead of hide it.

Still using this plugin a lot, thanks so much for developing it!

I have a feature request though, would it be possible to have a an option in the Floor tab to set the floor to Shadow Catcher mode to have a transparant floor and background but with shadows?

When the plugin still used cycles it was easy, but with the new faster Evee mode you need to do stuff with the shader editor and I just can’t seem to get it to work (I have zero experience with Blender). https://www.youtube.com/watch?v=DQJ_SBpcUQE

Hello, I use your plugin and it is awesome ! I use the animation rendering get the blender file (awesome job about the time !) but I have no color from VC (my blender file is grey), what I have to do to get at least VC colors ?

Edit : I find the solution, I have just to clik on the right icon in Blender

I unfortunately found out that swept geometry will not export to RenderVideos! -> In Renderpictures it works well…

Would be great if this will work too.

Immediately after starting programm this message appears in the Output window:

What i can do with it?

You could try to comment out the line 14 in the Blenderer.py file.