Access/change part within a buffer... Possible?

Is it possible to access and change specific parts within a buffer, without removing them from the buffer?

What I would like to achieve (with or without using a buffer), is to have a row of shipping containers lined up somewhere, pick one, and fill it up where it stands before shipping it off. While it’s being loaded, I’d like to have it temporarily replaced with an assembly of an open container with slots to be filled… In other words, I’d like to assemble an assembly inside a buffer slot…

I suspect the answer is no, but I thought I’d ask

I suppose I can achieve something visually similar to this with lots and lots of nodes, paths and painstaking coordination, but would be really neat if it could be done with only one buffer. I’m open to any other suggestion. I’m very new to this, and have lots to learn. Thanks

Probably not with a buffer, but you could clone several Process Nodes in a row.
In each process, you then do the following:

Sorry for late response. I’ve been trying it out. Started simple the way you suggested (I have 5 process nodes so far), but I want it more coordinated.

If I remember correctly, the 4 steps you gave me (And which I am quite familiar with) changed all my containers simultaneously, and the feeder filled them up concurrently. I think this changed a bit when I gave each node a unique name, in which the feeder started prioritizing node 1, but would also feed the others whenever it could/had time.

I want the product feeder to feed only one shipping container at a time. The one being worked on is the only one that should be replaced with an open container. The others should wait their turn unchanged/closed, so I need to figure out how to pause their processes before the replacement step.

Been fooling around with signals and while statements… Took me a while to figure out how any of that worked. Now I’ve sort of got it, but I’m unable to use it correctly. All I have so far are these statement monstrosities that do “something”. I’m embarrassed to share, but maybe someone can give me some pointers: 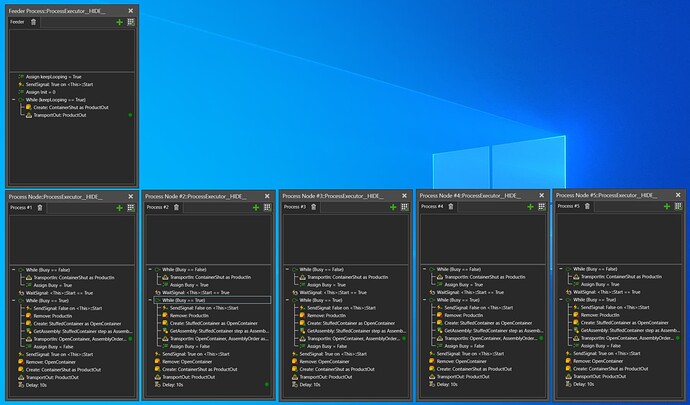 Node 3 to 5 (on the left) are just left hanging there, never worked on since the first round…

Output is basically this over and over

Have a nice weekend

I think you got the right idea, but the execution is still missing some details.
All processes could probably use the same name if they are doing the same task, but then you need some properties and conditions to control which process is filled at a time.

Here is one example I created some time ago. Not quite the same as what you are trying to do, but it shows one way of using properties to control which process gets parts.
It uses change product type, and transport in filters to control where the part goes from the feeder.
Priority_example.vcmx (2.0 MB)

Thank you, I always learn a lot from examples. I was wondering how to make a process be aware of variable states in other processes, and can see how you’ve solved this here… I think this will help

Thanks again Este, got it to work much thanks to you! Even though our objectives weren’t exactly the same, it’s just nice to see statements work as intended in a process, and figure out why it works

I’ll leave the file for anyone interested/in need of an example
LoadingQueue.vcmx (132.2 KB)